Honda’s CR-Z sport hybrid will be getting even sportier for the 2013 model year, thanks to new powertrain upgrades that were introduced at the recent 2012 Paris Motor Show.
Engineers went to work on both the CR-Z’s high-efficiency 1.5-liter I4 engine and its advanced electric motor system, fine-tuning the former to make roughly 7 more horsepower, and adding 5 kW to the latter by swapping its nickel-metal-hydride batteries for lighter, more efficient lithium-ion ones. As a result, combined system power has been increased approximately 10 percent, allowing CR-Z drivers to enjoy 135 hp and 140 lb.-ft. of torque, noticeably quicker acceleration, and unchanged fuel-economy marks of up to 35 mpg city/39 mpg highway/37 mpg combined.
The CR-Z will look more athletic, too. Designers have revised its front bumper and grille to create a more aggressive face, which is complemented by a redesigned rear diffuser. Two funky new exterior colors also have been added—Energetic Yellow and Aurora Violet—while the cabin gets a fresh color scheme as well.
Pricing has yet to be announced for the 2013 CR-Z, but any changes are unlikely to affect the car’s value proposition. The current model, for example, starts at just $19,695, and that includes LED brake lights, a six-speaker sound system, air conditioning (with an air-filtration system), and a three-mode drive system. The latter technology allows drivers to tailor the CR-Z’s driving dynamics for ECON, Normal and Sport modes—enhanced by a Plus Sport performance enhancer that can deliver a 10-second jolt of electrically boosted power in certain driving scenarios.
Consumers can look for the 2013 Honda CR-Z to reach U.S. dealerships early next year.
New Promotion Offers $3,000 Fuel Card for the Civic Natural Gas 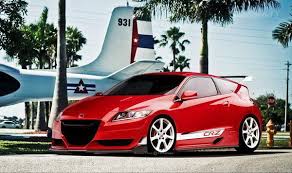